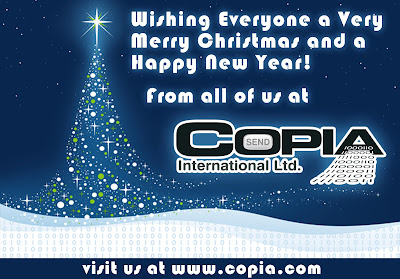 We hope you have a peaceful holiday season.  Copia offices will be closed until Monday January 6th but we will try to respond to any urgent support e-mail over the holiday.

Watch this space for a series of postings describing new features we have been working on for the next major CopiaFacts release, version 8.2.  We will start to introduce these features early in the New Year.
Posted by Tim at 1:33 PM

NetGen comes through with IP.fax media-feature tag on its Smart ATA's - One step closer to cutting the POTS cord! http://online.wsj.com/article/PR-CO-20130528-905409.html "More needs to be done, but together, these initiatives will set the stage for the 'PSTN cord' to be cut," added Steve Hersee, CEO of Copia International, a Smart ATA user. Hersee continued, "The stage is set, but now the industry needs players: equipment vendors that support RFC6913 and carriers that use it in their routing decisions. Copia is pleased that NetGen is the first in the ATA industry to announce support for this significant industry milestone. We intend to lobby our service-provider partners to support it."
Posted by Unknown at 4:28 PM No comments:

After a recent set of enhancements for FFBC, our next target has been the fax viewer.  Again the principal objective has been to improve ease and speed of use. 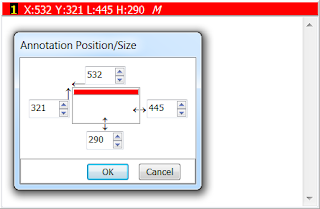 Finally, there are several small enhancements, including the ability to undo an annotation move after you have clicked on it with an unsteady hand and found it in a slightly different place.  And some minor fixes which are detailed in the reference manual, along with improved documentation of annotations and other FFVIEWER features.  See http://www.copia.com/support/refmanual8/index.html?annotation.htm.

Copia partners with babyTEL to provide Fax over IP service

Last week we announced the successful completion of interoperability testing of CopiaFacts with babyTEL Fax over IP (FoIP) services.

You can find background information and links in the press release here.  Please contact Copia sales if you would like to evaluate FoIP through babyTel on your CopiaFacts fax server.
Posted by Tim at 6:21 AM

Enhancements for the FFBC Broadcast Manager

Added up over all CopiaFacts customers, it is likely that a similar number of broadcast faxes and e-mails are sent from FFBC as are sent by larger users from Job Administration.  We have recognized this by upgrading and enhancing FFBC to introduce some of the features enjoyed by Job Administration users. The basic structure of the program is unchanged, and will remain familiar to current FFBC users, but hopefully we have made it easier and quicker to use.

The only elements that have been removed are the job owner and ID fields for the legacy job management system (you can still enter this information in the template editor) and the counts of multiple .1 .2 .3 files making up a single document, which have been replaced by more useful fields showing the file size.  The file size field enables you to see at a glance how long each broadcast item is likely to take to transmit.

Among the many improvements are:
Along with all these enhancements we have re-tested everything and fixed a few minor bugs and cosmetic issues along the way.

Finally the documentation has been rewritten to include all the new features: you can find it at: http://www.copia.com/support/refmanual8/index.html?ffbc.htm.  The new features are in build 8.1.0.122.